What others are saying about Fink Charolais genetics...

Fink bulls hold up great… and we topped a Superior Sale with our calves."
Cruiser Crews, Florida

"Bulls from Finks are not pushed on feed—which can create a multitude of problems."Shan Hullman, DVM, Kansas

"Our Charolais genetics from Finks help us consistently achieve 80 to 85% choice… and pounds!" John Keller, Kansas
Recognizing the need in our program to have a second breed led us to Charolais in 1999. The smoky cross is sought after by feeders and packers alike, and has been for many years. Disease resistance, muscle, pounds, yield grade and quality grade make them a perfect cross for all breeds in America.

We have used nearly total AI since 1999 in the Charolais. Pedigrees are stacked by at least three generations ( 87% accuracy) for calving ease and light birth weight. No bulls are used over a 1# BW EPD and most are under 0.5 with calving ease over 6. We have also stacked growth, good feet, great disposition, and 6-7 frame in deep soggy bulls with muscle! Many of the bulls are over 65# for yearling weight EPD.

Many folks often ask why we started Charolais. We felt the direction many were taking in the Angus breed (more growth, more mature size, $B-more terminal, more excess past the point of profit) was not where we felt the Angus breed was at its best. There was no second guessing about the Charolais breed. This way we could concentrate on keeping our Angus fertile, maternal, moderate size, etc. and not risk making Angus terminal! Hybrid vigor is proven!

Carcass results are also important in the bloodlines we use. Many of our customers, using Fink Charolais bulls on British type cows, continue to get 80-96% choice, yield grades 1,2,3( no fours) and 1300-1350# harvest weights at 12-14 months of age. They grade but don't end up with excess fat that cost a lot of money to put on!

We have also paid attention to maternal traits in the Charolais as we have more customers every year that experience the "smoky cow," and love them. No question that keeping the moderate framed heifers will produce females that raise a big calf, hold their weight well because of the extra muscle, and not melt away, plus all of the extra efficiency and fertility gained from hybrid vigor.

We supply white bulls across the U.S., and have one of the largest offerings of Charolais bulls in the country. Females are routinely offered by private treaty and production sales. We also pre-contract bulls to larger operations at reasonable prices. 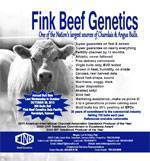 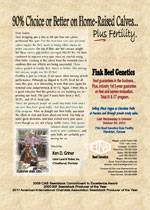